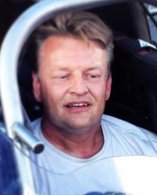 In the beginning of august 2019 we lost our friend, team owner & driver after the consequenses of a myocardial infarction. this site will be in memory of our beloved nitrobear.

Björn have been racing pretty much all his life, from Pro Street cars to Fuel Altereds and Nitro burning dragsters. Today he owns & drive his own Top Fuel Dragster that he purchased in 2009. He earned his Top Fuel License in autumn 2014 and have been racing in the FIA European Dragracing Championship ever since.

Björn loves to have fun, talk to fans and let his crew work hard on the car when attending to the races around in Europe. But outside the track it's a whole different story of very hard work to make all this happen.

He works on the car on weekends & week nights in his home shop, he builds everything in the race trailer on his own and works really hard in his own business to make enough money to run the car every year.